Significant Updates Released in the BidNow Sample for Windows Azure 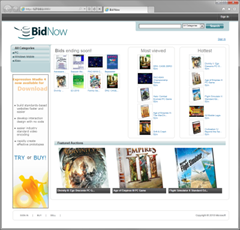 One of the difficulties that come with this many updates in a short period of time is keeping up with the changes and updates. It can be challenging to understand how these features and capabilities come together to help you build better web applications.

This is why my team has released sample applications like BidNow, FabrikamShipping SaaS, and myTODO.

What’s in the BidNow Sample?

Just today I posted the latest version of BidNow on the MSDN Code Gallery. BidNow has been significantly updated to leverage many pieces of the Windows Azure Platform, including many of the new features and capabilities announced at PDC and that are a part of the Windows Azure SDK 1.3. This list includes:

Yes, there are a lot of pieces to this sample, but I think you’ll find that it mimics many real world applications. We use Windows Azure web and worker roles to host our application, Windows Azure storage for blobs and queues, SQL Azure for our relational data, AppFabric Caching for reference and activity data, Access Control for authentication and authorization, OData for read-only services, and a Windows Phone 7 client that consumes the OData services. That’s right - in addition to the Windows Azure Platform pieces, we included a set of OData services that are leveraged by a Windows Phone 7 client authenticated through Access Control.

Here’s a high level look at the application architecture: 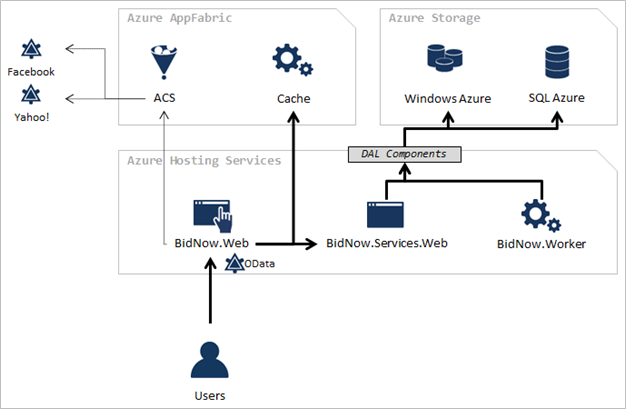 Compute: BidNow consists of three distinct Windows Azure roles – a web role for the website, a web role for the services, and a worker role for long running operations. The BidNow.Web web role hosts Web Forms that interact with the underlying services through a set of WCF Service clients. These services are hosted in the BidNow.Services.Web web role. The worker role, BidNow.Worker, is in charge of handling the long running operations that could hurt the websites performance (e.g. image processing).

Storage: BidNow uses three different types of storage. There’s a relational database, hosted in SQL Azure, that contains all the auction information (e.g. categories, auctions, and bids) and basic user information, such as Name and Email address (note that user credentials are not stored in BidNow, as we use Access Control to abstract authentication). We use Windows Azure Blob storage to store all the auction images (e.g. the thumbnail and full image of the products), and Windows Azure Queues to dispatch asynchronous operations. Finally, BidNow uses Windows Azure AppFabric Caching to store reference and activity data used by the web tier.

Authentication & Authorization: In BidNow, users are allowed to navigate through the site without any access restrictions. However, to bid on or publish an item, authentication is required. BidNow leverages the identity abstraction and federation aspects of Windows Azure AppFabric Access Control to validate the users identity against different identity providers – by default, BidNow leverages Windows Live Id, Facebook, and Yahoo!. BidNow uses Windows Identity Foundation to process identity tokens received from Access Control, and then leverages claims from within those tokens to authenticate and authorize the user.

Of course, there’s a lot more that you’ll discover one you dig in. Over the next few weeks, I’ll write and record a series of blog posts and web casts that explore BidNow in greater depth.

To get started using BidNow, be sure you have the following prerequisites installed:

As you’ve come to expect, BidNow includes a Configuration Wizard that includes a Dependency Checker (for all the items listed immediately above) and a number of Setup Script you can walk through to configure BidNow. At the conclusion of the wizard you can literally hit F5 and go. 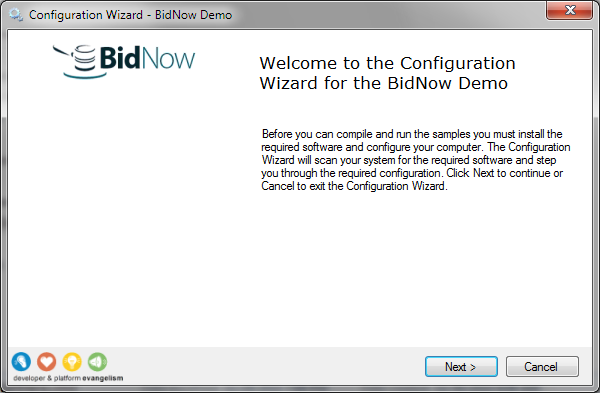