Now that we can get our hands on the Windows Developer Preview of Windows 8, I’m sure everyone is excited to start building applications! For many of us, this means that we’ll want to install all of the great Windows Azure tools on our Windows Developer Preview machine – especially if we plan to take advantage of the new Windows Azure Toolkit for Windows 8. However, there are a few things we’ll need to do in order to get things to work.

Quickly let me explain the three challenges you’ll run into:

Fortunately, these things are pretty easy to resolve and will certainly get addressed in later builds.

Here’s what you’ll have to do to get the tools and SDK working with the Windows Developer Preview:

As you can see, the script changes the VisualStudioVersion to 10.0 then launches Visual Web Developer Express (there’s a little extra code to set the path correctly regardless of 32- or 64-bit versions of Windows). 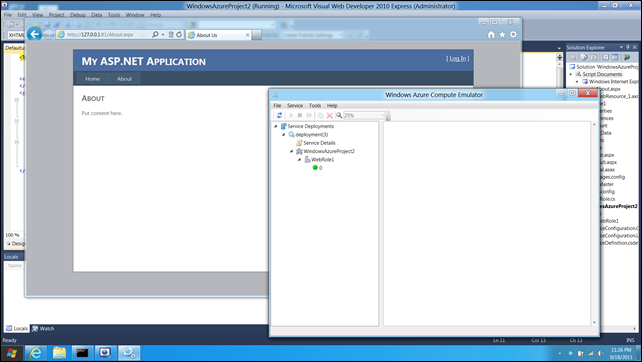 NOTE: I found myself having to reboot Windows 8 in order to resolve a problem where the debugger wouldn’t attach. Not sure if this occurs every time, but in case you have a similar issue just try rebooting.